My personal blog and my open-source projects 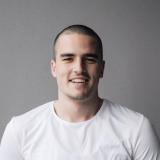 Software engineer from Sarajevo, Bosnia and Herzegovina, proficient in Android development, but also interested in many other technologies including Kotlin, Spring, Elixir, C, C++ and Unreal Engine.